A is for Air Supply: Digging for Gems in the Dungeoneer's Survival Guide

The A to Z Blogging Challenge

How does the Challenge work?
The premise of the Blogging From A to Z April Challenge is to post something on your blog every day in April except for Sundays.  In doing this you will have 26 blog posts--one for each letter of the alphabet.   Each day you will theme your post according to a letter of the alphabet.
You will only be limited by your own imagination in this challenge.  There is an unlimited universe of possibilities.  You can post essays, short pieces of fiction, poetry, recipes, travel sketches, or anything else you would like to write about.  You don't have to be a writer to do this.  You can post photos, including samples of your own art or craftwork.    Everyone who blogs can post from A to Z. 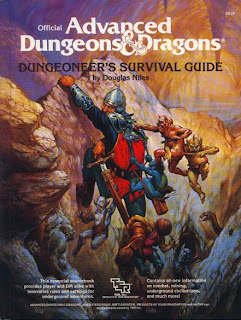 In 1986 TSR published the Dungeoneer's Survival Guide (DSG) by veteran TSR author Douglas Niles. Some hold that nothing good was published after 1983. Others are less harsh.

Grognardia in his retrospective has this to say,
"In the final analysis, Dungeoneer's Survival Guide was a brilliant failure and emblematic of many of the trends I eventually came to dislike about the direction of AD&D in the later years of TSR. It was -- and is, I'd still contend -- an inspirational book, one whose text often conveys the beauty and wonder and horror of subterranean locales so well. As a rulebook, though, it's less than ideal, simultaneously being too nitpicky and too easily cast aside. And its intention of adding new depths (no pun intended) to both the physical environment of adventures and to adventurers themselves was another nail in the coffin of the Old Ways. It's a pity, because, despite it all, I still have a fondness for this book, even though its publication was another step down a path whose ultimate destination I strongly dislike these days."


Delta's comment to Grognardia's retrospective is,
"These 2 books [DSG + Wilderness Survival Guide] together marked the grave of my AD&D play at the time."

Other negative comments to the retrospective
Evocative but useless. [faustusnotes]
It offered a lot of promise that it never quite got around to delivering on, and at the same time cluttered-up things with a lot of evocative inspirational stuff that was more often than not better handled via narrative than dice-rolling, in my experience. [NetherWerks]
Reams and reams of dry, dry detail on subjects like spelunking, hiking, mountain-climbing, foraging for food, etc. It's like somebody took my old Boy Scout Handbook and randomly-pasted some workmanlike but completely unnecessary RPG rules throughout. So see something so...aggressively mundane...bearing the D&D name always bugged me.  [Will Mistretta]


Not to say it didn't have it's fans and certainly more fans than the Wilderness Survival Guide.


I never owned a copy in my D&D prime. I actually always wanted to own the Wilderness Survival Guide, all those weather systems seemed exciting. I now own both, acquired about two years back in mad collecting eBay completionist frenzy. I have read neither.


So my theme for the April 2011 A to Z Blogging Challenge, is Digging for Gems in the Dungeoneer's Survival Guide. Is there any gems (good advice, nuggets of wisdom, something cool, something easily house ruled) that is worth salvaging from the wreckage that was late 80's D&D publishing. That's my task... let us begin.


A is for Air Supply
From DSG Page 36
"Assuming no ventilation whatsoever, a human-sized creature at complete rest depletes the oxygen in 10 cubic feet of air within 24 hours. A character who is working strenuously uses oxygen four times faster than a resting character, and a moderately exercising character uses the oxygen up twice as fast as a character at rest."

"A character does not instantly die when his air supply has been used up, but serious problems arise. Each turn following the exhaustion of the oxygen, the character must make a Constitution Check. Every time the check fails, each of his ability scores and his hit point total are reduced by one. Each additional Constitution Check is made against the reduced Constitution score. Thus, a character grows more and more feeble as he gulps the last remnants of the oxygen supply. When all of a character’s ability scores have dropped to 0, he is unconscious. When a character’s hit point total reaches -10, he is dead. Even for a character with a large number of hit points, this fate becomes automatic once the Constitution score reaches 0, since all further Constitution Checks automatically fail. This system is used only for characters in an area with air; it cannot be used for characters who are holding their breath."
"A small fire (one foot or less in diameter) consumes all of the oxygen in a ten-foot cubic space in two hours (1 2 turns). A flaming torch consumes all of the oxygen in the same space in eight hours. A flask of burning oil does not burn for very long, but uses up a lot of oxygen while it burns. In general, oil in a flask or similar small container burns for three rounds. For purposes of oxygen consumption, however, treat the burning oil as a small fire (as explained above) and treat each round of burning as a full turn. Thus, an oil fire that lasts three rounds uses up as much oxygen as a small wood fire burning for three turns."


Thoughts:
Oxygen Consumption
Most standard maps are 10' squares, ceilings perhaps 10' tall, therefore 1000 cubic feet. Every square provides 100 days worth of air! Seems too much. This link suggests 388 cubic feet oxygen consumption in one day. But CO2 (carbon dioxide) production is a real killer. This link has some formulas but supports the fantasy answer: "A 10 X 10 X 10 foot space, or 1,000 cubic feet, will be filled with a lethal concentration of CO2 by one resting human sized individual in just 24 hours. (The CO2 level reaches about 1% in that time). Moderate activity will cut this time to 12 hours, and strenuous activity to 6 hours."
So I think in the end, this is sort of what Douglas Niles meant to say - a 10x10x10 foot space, provides enough air for one man size person's 24 hours survival.


Breath Holding
I understand why slow oxygen starvation is not the same physical effect as breath holding, but really, can't we use a similar fantasy game mechanic. DSG page 12 says, "If a character has a chance to take a large breath of air, and does not perform strenuous exercise while holding his breath, he can hold his breath for a number of rounds equal to 1/3 his Constitution Score, rounded up." Trouble is, is one round one minute AD&D, or B/X 10 seconds. Makes a big difference here.
AD&D 1st edition DMG or PH, has no rules that I can find (please let me know if you can).
AD&D 2nd edition says for breath holding as many rounds as 1/3 constitution.
Cyclopedia = 1/2 one's constitution score in rounds. (seems very short to me)

I plan to house rule for B/X as your constitution score in rounds + level. Once constitution exceeded, Save vs paralysis every subsequent round, else drown/die.
I leave this one for you and your DM.


What gem can we take:
1. Every 10x10x10 foot space provides enough air for one man size person's 24 hours survival.
2. Any small fire consumes 24 hours of oxygen in 2 hours, and every round of flaming oil is 1 turn (10 minutes).
3. Breath Holding Rule (see above)