Resurrection, a Spell Retrospective - An Easter Message from the Jovial PRIEST 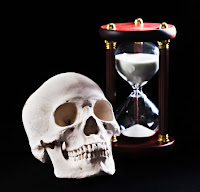 Resurrection in B/X and BECMI
Unfortunately these rules contain changes and contradictions.
Raise Dead
The fifth level cleric spell Raise Dead becomes available to clerics on reaching 10th level but originally this was available at 7th level in my Cook edition of Expert Set.  This rule was changed because clerics were seen to be rising in power too quickly and with the new concept of a maximum 36 levels, as elaborated in the Companion and Master's sets, increasing the level required for 5th level cleric spells would bring the Expert set into line.  (Thanks to Mark Bertenshaw for this information.  I   recommend a look at his excellent web site review of Classic D&D material)
This change seems well and good, but contradictions still abound.  Both the Cyclopedia and my Cook Expert set state that an 8th level cleric can raise a body that has been dead for four days and with every level after 8th this increases by four days.  Where did 8th level come from, since the spell is available only at 10th or 7th level? The Unofficial Dungeons & Dragons Rules Cyclopaedia Errata, by Jason Mac Innes, suggests that this is an error and what was clearly intended was 10th level.
So a 10th level cleric can raise a body that has been dead for four days.  This isn't a lot of time to get a body back to a cleric for resurrection, as many players have discovered.  One option would be to decide that the error should be read as giving a 10th level cleric 12 days to raise a human or demihuman and this increases four days/level from there.
Personally I believe that Raise Dead is so miraculous an event that the four-day requirement, increasing from 10th level, is appropriate and should be kept.
Raise Dead Fully
Raise Dead Fully is gained at 17th level (BECMI).  This allows the resurrection of humans or demihumans who have been dead for four months increasing by four months/level (plus the ability to resurrect any other living creature as per the restrictions of Raise Dead.)  Thus a 17th level cleric could cast Raise Dead on a human or demihuman who has been dead for 32 days or cast Raise Dead Fully on a human or demihuman dead for 4 months.  Whereas Raise Dead specifically states that missing limbs will still be missing, Raise Dead Fully returns the recipient to the same state they were in before death, including the continuation of any curses or diseases.
This begs the question how much recipient tissue is required to cast Raise Dead Fully.  I think at least the skull must be present otherwise a player could store a finger with a cleric to be used in case of death and it would become more like the 8th level magic-user spell Clone.
Wish
A 36th level cleric with an 18 or greater Wisdom may cast a Wish spell.  Apart from the rarity of finding such a cleric the details of Wishes as given by the Cyclopedia on page 40, show they are problematic.  Firstly it suggests that 'generally' they should mimic only 6th level clerical spells or less, discouraging the use of Raise Dead Fully.  Secondly if used to change events it is suggested that only the previous days events be able to be altered.  I can accept the second but I think for the purposes of resurrection the restriction to 6th level or lower spells is too limiting for such a powerful world-changing spell.  Resurrecting a past hero, dead for centuries, is the stuff of epic adventure.
I wrote this research many years ago, and from my research I wrote a short article proposing a Resurrection Society, with upgraded rules for Labyrinth Lord.
"It began as a simple idea, a Resurrection Society.  A mutual non-profit organisation dedicated to the rescue and resurrection of its members.  What it became was something no one expected."
Rules for a Resurrection Society and the consequences of introducing such a society into a Campaign World,  was eventually published by Methuslah of OD&Dities in OD&Dities 15. Go on purchase it, $2, and Methuslah outlines a whole elementalist class.
It was the first and only time I have been paid for my writing! A whole $50, if I recall. I have been paid now, so I get no profits.
But what would modern Easter be, without a blatant commercial plug like this is?
If you are feeling tight, check out his free OD&Dities Fanzines at Dragonsfoot.
It's what got me back into D&D.
Happy Easter!