Index of April 2011 AtoZ posts: Digging for Gems in the Dungeoneer's Survival Guide 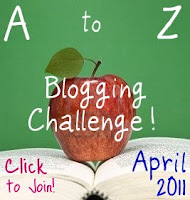 Well the A to X is complete. My month long foray into the Dungeoneer's Survival Guide is over. I thought it worthwhile to create an index page of my posts and the gems I discovered.


A is for Air Supply
Gems
1. Every 10x10x10 foot space provides enough air for one man size person's 24 hours survival.

2. Any small fire consumes 24 hours of oxygen in 2 hours, and every round of flaming oil is 1 turn (10 minutes).
3. Breath Holding Rules (see post)
B is for Belays
Gems
1. Non thief characters have a base chance of climbing success of 40%, which can be modified by race and climbing surface if desired. A complicated table can be used to give movement rates for climbing (if desired).
2. If ropes are involved they can be of belaying (not tied) or roped together variety.
3. If a character is falling with a rope held by characters on either side of him or her, BOTH supporting characters must succeed to arrest the fall.
3. For every additional character falling -10% is deducted from the chance of success for a Climbing Check.
4. For belays, failure means the character's fall is not halted, but the belayer is not affected (well not physically, perhaps emotionally...) Success means the fall is arrested, unless the belaying character is on dangerous or narrow ground, in which case a 2nd Climbing Check must be made, failure means the belaying character has fallen as well.
5. For parties roped together, no 2nd Climbing Check is required. Success means the fall is arrested, failure means the character has fallen as well.
6. Climbing checks continue until each character on either side of a falling character succeeds, the entire party falls or if only one end of the rope line/belay has fallen, a single character can arrest the fall.
7. Spikes can arrest the fall of an entire party, but have a chance of pulling loose at 10% per character the spike is trying to support.
C is for Caves and Caverns
Gem
1. Though the golden age had passed and the silver age was passing, the tone of TSR publications remained mature and educational. Not what one would expect to find in a fantasy game rule book, but one aspect of the hobby that captured a younger me and I am sure, many of you.
D is for Deepearth
Gem
1. Deepearth (the campaign world created by Douglas Niles)
E is for Easley
Gem
1. Jeff Easley illustrations


F is for Fungus
Gem
1. Fungi are fun


G is for Gems
Gems
1. Gemstones themselves, there are many different types and if you discover a mine of them, the Dungeoneer's Survival Guide will tell the DM all one needs to know.
2. And a table I made on gem values


H is for hook (grappling)
Gems


A character can throw a grappling hook upward a distance to 1/3 of his Strength score (rounded up) times 10.
2. The horizontal distance that a grappling hook can be thrown equals the vertical distance, unless the character has enough room to swing the hook in a circle several times before the cast. In this case, if a character has a radius of 10 feet from his body cleared of obstacles, he can throw the hook twice as far horizontally as he could otherwise.
I is for Isomorphs
Gem
1. Isomorphic mapping advice (now supplanted by computers)
J is for Jumping
Gem
1. Broad Jumping Rules
K is for Kraken
Gem
1. Deepearth can be a very cool setting, especially with a Kraken that has somehow adapted itself to live in fresh water.
L is for Loosing a Lick and Losing the Lost Lodestone
Gems
1. Lichs are not lovely
2. Lost is both a state and a description of the plot to a popular TV series of the same name.
3. Lodestones pull their weight
M is for Mining
Gem
1. If you need some mining rules - here be good ore
N is for Niles
Gem
1. The most coherent advice for the intermediate experienced DM ever published in the Gold and Silver
age of TSR.


O is for Odor and Explosive Gas
Gems
1. Rules for Odor Detection


2. Rules for Gas - Poisonous, Noxious and Explosive
P is for Proficiencies
Gem
1. The further development of non-weapon proficiencies - not really a gem.
Q is for Question
Gem
1. The mysterious © artist is Doug Chaffee
R is for Roslof
Gem
1. In memory of
S is for Spelunking
Gems
1. Spelunking rules
2. An encouragement to make the physical world a challenge in itself
T is for Theories
Gem
1. The world is not solid, it is hollow, well that's one theory anyway
U is for Underdark
Gem
1. Underdark, as first termed in the DSG
V is for Volcanoes
Gem
1. Lava is hot!
W is for Water
Gem
1. Rules for hypothermia, water flow, damming a river, underground water travel and many more
X is for Xeno
Gem
1. Sure we have D1-3, but the DSG does give you ideas for a whole subterranean world - it just doesn't do dungeons. Perhaps, Deepearth Survival Guide, or The Underdark Gazette - hey that would make a nice blog title...
Y is for Year
Gem
1. The Dungeoneer's Survival Guide, mid-silver age according to Grognardia 1984-1989.
Z is for ZAT'S IT
Gems I took after this month long challenge
1. Without the discipline and motivation of the AtoZ challenge my copy of the DSG would have sat in a darkened loft space, for another decade unread. Like my copy of the Wilderness Survival Guide. Or Greyhawk, Dragonlance and many, many modules I have purchased in the last decade from eBay. So I thank the AtoZ organisers for the inspiration.
2. I never purchased the Dungeoneer's Survival Guide, in my day. I was still playing, but it was expensive, and I would have bought the Wilderness Survival Guide instead (all those weather systems). After exploring it for a month, I can't say I have learned to love the DSG. In the end, it's too verbose, rules for the sake of rules, too campaign setting (alluding to TSR's future publication obsessions - Forgotten Realms, campaign world after campaign world); but still their are moments when the DSG lifts one's imagination. The art certainly helps. And for that I am glad to have spent the last month with it.
3. We have yet to escape the fact that RPG companies be they LotFP or WOTC, must continue to make new products to make money. This is because in my opinion, they must sell, more to the converted. Because new sells, and old dies on shelves. The Dungeoneer's Survival Guide was part of that mentality. Publish or perish. What if we merely expanded the numbers playing, using the same old but trusted books. The world becomes your oyster, and we almost become a club trying to get new members, their membership fee, the classic books. The business model - support your current fans, encouraging them to find new fans. 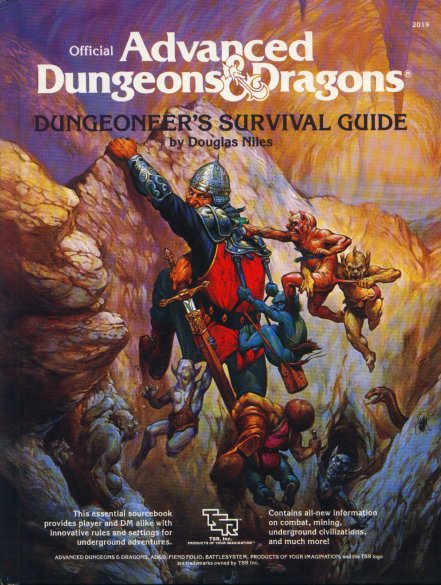