This is the fourth session of Kids D&D I have run, all using Jimm Johnson's excellent Kid's D&D rules and character sheets. A perfect complexity for this age group.

If you remember last time however (if not click here), it ended on a cliff hanger. The Queen had gone missing and the party explored under the castle kitchen until eventually discovering she had been captured by a dragon. In the final fight the dragon had taken hold of the Queen and flown away, saying, 'Find me if you dare at the Lonely Mountain.'


Before we get onto the session, I'll first outline a change I made to Jimm Johnson's rules. His rules give the four character classes, each a special ability.
Knights - attack twice per round
Wizards - can cast two spells per level (per game) [also spell level = level i.e. 2nd level wizard = 2 1st level spells + 2 2nd level spells]
Elves - can cast one spell per level (per game), but can wear armor
Dwarves - can automatically find secret doors.


I had always made sure there were some for the dwarf to find, but even so, this skill is lame. I thought so, as did the 7 year old cousin.


I wanted to choose something better. Since dwarves are hardy folk, I thought of a saving throw bonus. Jimm Johnson's rules, have a single saving throw for everything. I considered different bonuses, but when compared to double attacks and spells, it all seemed a bit, nah.


I decided therefore that dwarves, 'Always Succeed' their saving throw. I made the player write 'always succeed' into the saving throw box.


Game balance? Really Kids D&D is about the fun of the moment, not the campaign. Who wants a lame character? I was pleased the dwarf player was excited by this change and my suggestion even headed off a lament he was starting to say regarding his secret doors ability.


Interestingly, for the second time running all the players, except the dwarf player, wanted to rename their characters, and all drew a new picture.


DM Notes: In this session I wanted there to be a moral choice for the players that would effect the ending, a wilderness natural obstacle to be overcome and a DRAGON to be defeated.


The introduction
The King and Princess, from the earlier rescues, offered the party horses to ride. As usual I was using my Warhammer miniatures, and this time they all chose a figure on horseback, in addition to their usual character.

Follow the path out of the castle until you come to a bridge, cross the bridge and carry on through the Dark Forest until it opens onto the Lonely Mountain above the Lake of Tears. The way is treacherous; hopefully you will find a map or a guide to help you on your way."

Like the last adventure, if they rescue the Queen, the promise was renewed that they will all be made Lords and Ladies of the Realm!

DM Note: this was the first outside adventure - the whole design is extremely linear, which would not do for adult play (though some editions of D&D have attempted it) but is very suitable for kids and maintaining their attention. I have found they are not crying out for more choice. 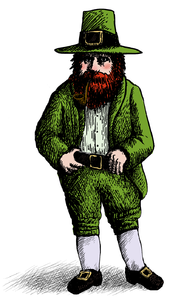 He will give these items to the party in exchange for the promise to give him whatever item he asks for when next they see him.

After some discussion about making such an open ended promise, the party agreed. He then gave them the items and let them stay in his tree house for the night.

The next morning he had disappeared!

The party come upon a scary bridge, with a sign demanding 10 gold each to cross. 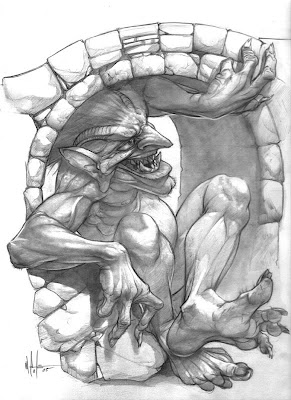 Under the bridge lives a troll.

This was where the flint, tinder and oil came in handy. The fireball from my daughter helped them know that the regeneration stops if caused by fire. It was cool to see them discover for the first time, that trolls regenerate.

Under the bridge they found the trolls lair.
4 potions of antidote
2 potions of healing

And this painting. I handed them a physical copy. 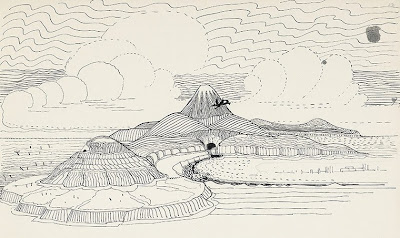 They certainly recognised it for the lonely mountain. [I know the name and idea is totally ripped from J.R.R. but I want them to be as excited as I am about the upcoming Hobbit movie]

A green river of bubbling greenness. I found this picture and just showed them and said, this is what you see, how do you get across. 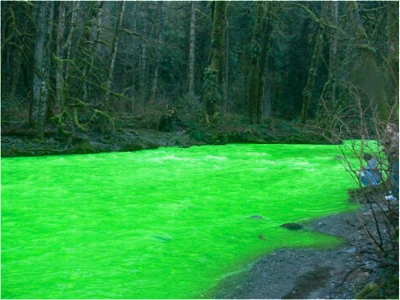 DM note: I was wanting them to have a chance to overcome an obstacle that wasn't combat orientated and required collective thought.

This was a real fun bit. One player said they should build a catapult, but he couldn't explain how to build one, so that idea fizzled. They discussed rafts, swimming - but it burnt through an arrow that they tested the water with. Eventually they decided that the wizardess would use the fly spell she had chosen, and fly up one tree, tie a rope, then fly the rope across to the other side of the river and tie it lower down, creating a zip wire. They found some twigs in a v shape they could hold onto.

Except they couldn't take their horses.

I made them each roll a save to succeed. The wizardess was already across, the dwarf always succeeds!!, and two others made their saves (at level 3 needed a 13+)

One of the elf players decided she would try something different. And here is where miniatures, I think, limit imagination.

The miniature looked something like this. A Brettonian from Warhammer with lance (mine isn't so well painted) 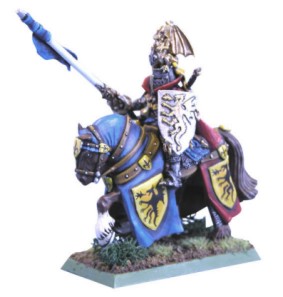 She decided, practicing a few times with her miniature, to ride up to the edge of the river and use her lance to pole vault over the river! On a miniature it looks possible. I told her to role a d20. That's how many hit points she would lose, but if she rolled a 20 she would succeed (nonsensical I know). She went for it, rolled a 7, and survived scrambling out of the acid river with 7 HP damage (I would have allowed a round for healing potions if she looked like dying and wizards in Kids D&D can cast cure). Killing characters in Kids D&D is poor sport.

Unfortunately the horse wouldn't pole vault, because in real life the rider and horse aren't glued together.

This led to lots of laughs as the kill count was: one troll and one horse.

On the other side of the river was a dark forest.

It led to an encounter with 4 Tarantula spiders. [another Hobbit rip off]

Now Tarantula spiders are cool [see Labyrinth Lord for rules]. If you fail your save you start to dance. And if anyone sees you dancing they have to roll a save or start dancing as well. 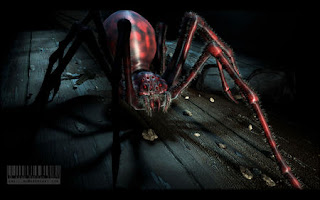 This was a long combat.

The wizardess used, like last adventure, speak with animals. I ruled. like previously, that while she talks to the animal, it won't attack her. She promised the spider horses to eat, which worked well, until she let slip the horses were no longer with the party.

The dwarf managed to fight off a few spider bites, because he always succeeds!, but soon,  two characters were dancing beside their chairs (one on the chair because he is 5), shouting help me to the rest of the party. Great fun.

Eventually two spiders were dead and the other two, at the urging of the wizardess, fled.

In their webs
3 potions of protection from dragon breath 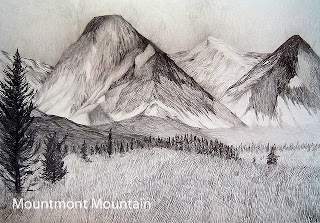 On the copy I gave them I ripped out the corner saying Mountmont so it only had '... Mountain’.
The party immediately realised the mountain did not look lonely in the picture.

Lynas magically reappears before the party. He asks for the party to honour their promise to give him one item of his choosing from the party. He asks for a painting of the Lonely Mountain.
What will the party give him? They can give him the Mountmont Mountain painting as a fake, or the real, and potentially make it harder for them to find the lonely mountain. That's what the King and Princess said, find a map or a guide.

If party chooses to give the fake, they will have to attack from the front entrance of the Lonely Mountain and the dragon will be awake and expecting them.

If they give the real painting to Lynas, he leads them to a clearing where six Pegasus lie in wait. 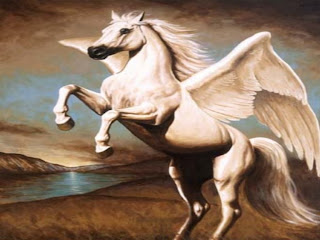 The party chose to give the real painting. They therefore got to hop onto the back of the pegasi and were then flown to a secret entrance in the lonely mountain that leads directly down a single narrow corridor to the sleeping dragon!

The party see the sleeping dragon and the Queen chained, Princess Leia like [no description given as to attire], to the dragon. 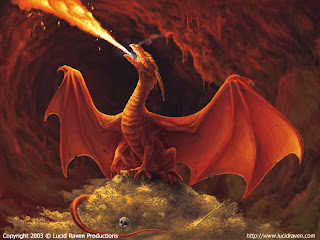 I quite like Brendan's Dragon Rules. So I used them. Though I think, after reading some Appendix A material from LoTR, that cold drakes, need to breathe frost. So coloured dragons remain cool.] This dragon was red.

Reproduced from Brendan (more is on his post)
"A dragon's age and power are reflected by hit dice. To determine dragon hit dice randomly, roll 3d6. If the result is all sixes, roll another d6, adding the result to the previous total. Continue this procedure as long as sixes are rolled.

Hit dice also determines the damage inflicted by a dragon's fiery breath. For example, a 12 hit die dragon will do 12 dice of damage to all in the area of effect (half damage if a save is made). Once a dragon has breathed fire, they must wait 1-3 rounds before they can breath again. Breath weapon damage dice, like standard hit dice, are always d8s. The breath weapon range is equal to the number of hit dice multiplied by 10 feet, and it spreads out like a cone (the dragon has approximate control over the cone width).

Dragons may either breath fire or make up to three physical attacks (these could be bites, claws, tail slams, or any other kind of attack that makes sense in the situation at hand). Each physical attack does one die of damage. The die used should be that closest to the total number of hit dice the dragon possesses. For example, an 8 hit die dragon does d8 damage per hit. A 9 hit die dragon would do either d8 or d10 damage per hit (decide beforehand, determine randomly, or alternate)."

The party had surprise, some 3rd level spells and they won initiative, the dragon died without getting a hit in.

Cheers erupted from my players.

They saw all the treasure and started salivating, but Lynas entered and transformed into a dragon before their eyes. The red dragon was his evil brother, he told them, and the party had successfully defeated him. Now Lynas claimed his brother's treasure. He offered the party 1000gp each.

The pegasus flew them home and as just reward they became Lords and Ladies of the Land.

The cousins rated it as a highlight of their holiday week. Yeah.

The next morning after the game however, my son was lying in bed beside me, I was still half asleep, and he said to me, "Next time we play D&D, I want to be a dwarf."
"Why a dwarf?" I asked.
"I want to always succeed," he replied.

Posted by The Jovial Priest at 18:24 3 comments

Ark does it again! Click the pic to link. 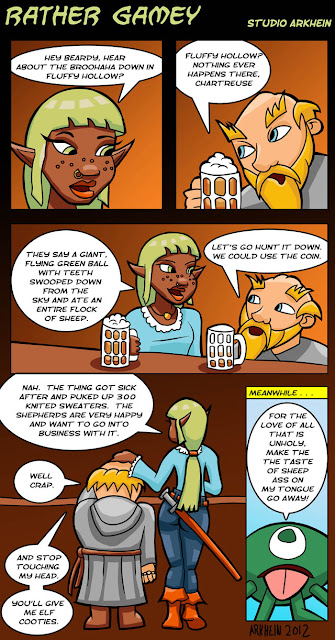 Posted by The Jovial Priest at 21:22 2 comments