The June / July talk about dexterity, AC and shields had me wondering about the role of encumbrance.

From my understanding of D&D's early history AC was just that, the armor class, that was determined purely by the type of armor worn.

Then things like dexterity started to modify AC, until it really should have been called Defence, since it was gradually being divorced from the armor type. This is even more apparent if we wish to consider the proposal that dexterity = armor class.

The appealing motivation of such a change is NOT to become more simulationist, D&D combat is at it's best when abstract, but it is increasing incentives to player choice that is most attractive.

In one of my most popular posts ever I wrote of my frustration that starting at Level 1, characters could afford the best non-magical armor in the world, plate mail. Why then should they care for chain, ever?

I still stand by that proposal and in my recent campaign the cost of armor is drastically increased.

Chain Mail     5    150       300
Plate Mail       3    400      450
Shield            -1      10      150
When I played Keep on the Borderlands my players even contemplated casting a sleep spell on the town guard just to get their hands on some chain mail! The first two gaming sessions, if they had a theme, would have been the "Search for better armor'
So the new costing was a great success.
But eventually characters that are allowed armor find plate mail and that's the last they contemplate any other armor source. And certainly wearing no armor by choice, is just nonsensical.
It is no wonder then that D&D combat rules struggle to model for unarmored duelists, firearms and a myriad of other additions to a campaign setting you might wish to add.
It was thinking about firearms that led me to some new considerations on this topic.
It was the ability of firearms to penetrate armor that led to the fall in armor use in the late middle ages. I say fall, because armor certainly didn't die out as a concept.
The famous Australian bush ranger Ned Kelly in the 1800's put some armor to some short but iconic use. 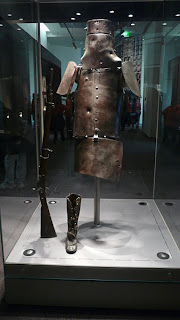 In the end the lumbering knight gave way to the mobile cavalry, pikemen and red coats.
Protection was replaced by mobility, because in the world that was emerging, mobility was the new protection.

Some have modelled the power of firearms against armor by giving firearms armor penetration. I think this is an ok model if it is not based on a false conclusion. If I'm being shot by a bullet I don't suffer more damage because I am wearing armor, I suffer less. The reason wearing heavy armor against firearms on the battlefields may not be such a good idea, is because I am less mobile and more likely to have the bullet (or shot) hit me in the first place.


Now this could be modelled as weapon (firearm) vs AC.
Chain Mail +1 to hit
Breast Plate and helmet alone +1
Plate Mail +2
Plate +3


But what we are really saying is not that the bullet is better at penetrating plate armor then chain mail, it clearly isn't; no we are concluding that someone in plate is less mobile then someone in chain mail, and thus easier to hit. But, any visit to a historical reenactment, or the UK Royal Armoury in Leeds, will quickly dispel the myth that armor decreased in mobility in nice step wise increases in armor strength. So it isn't really that easy to say plate mail is much worse than chain. It might be, but it depends.


In D&D however, we already have a rule system in place to deal with issues of mobility, it is called encumbrance.


Now to a question? How often in your campaign does the character's mobility effect game play? Honestly, how often do your players get chased so that their movement rate is the difference between life and death?
I would think that most players, if they think of encumbrance at all, it is not in terms of their character's movement rate but in terms of how much they can carry.
Many of us are lackadaisical when it comes to keeping tabs on movement rate and it's enforcer, encumbrance. But with Raggi's rules or my own adaption of Delta's 150cn = 1 dungeon stone rules (outlined again below), encumbrance is fairly easily accounted for.
So how could penalties to AC based on encumbrance incentivise player choice?


1. It makes chain mail +1, or elven chain, a worthy, even superior, competitor to plate mail.


3. It allows heavily encumbered characters to be missile targeted more easily (opening up firearms as a deterrent to heavy armor)


If we adapt from B/X


Or from my last post an alternative chart that emphasises the roll of initiative:


Perhaps, just perhaps, player consideration regarding what type of armor to wear, just for a moment, there was umm... maybe I won't wear this plate mail.

Notes regarding movement, strength and encumbrance.

Posted by The Jovial Priest at 22:40 2 comments

This began as a tinker with creating B/X rules that incorporate weapon speed. For better or for worse I didn’t stop until I had re-imagined B/X combat. I am sure it owes inspiration to many sources; even Alexis. I hope it adds strategic choice to combat without being overwhelmingly crunchy, though I suspect crunchy is the adjective most will choose.
Re-imagined Combat Sequence
All combat is based on 1 round, which is made up of 10 segments. Combat order is determined by personal initiative.
At the start of combat each character and NPC roll for personal initiative on a 1d6 and the DM rolls one initiative roll of 1d6 for each group of similar monsters.
Initiative is modified by:
- dexterity bonus / penalty
- halfling bonus +1
- flying +1
And at DM discretion:
- charging +2 (lose dexterity bonus to AC)
- larger than man size -1
- giant size -2
- any monster the DM feels is especially quick or agile (+1 to +3)
- higher level fighters will gain bonuses instead of increased numbers of attacks per round
Additionally encumbrance has the following penalties:
Once personal initiative is determined the DM calls for actions able to commence at segment 10 and then moves down 1 segment until segment 1, after segment 1 actions the combat round ends. No personal initiative can ever exceed 10.
A combatant can act on the segment that is determined by their personal initiative minus the Speed Factor of the action they are attempting. Any actions by any number of combatants occurring on the same segment are considered simultaneous.
For example Brian rolls a 4 for personal initiative modified by +1 for dexterity 13 = 5. He is wielding a normal sword (SF 4) so that he could attack only when the DM declares actions for segment 1 (5-4). If he was wielding a dagger he could have attacked on segment 3.
Any injury received before the combatant has carried out their action results in the loss of 2 from personal initiative.
So if Brian was hit on segment 6 his personal initiative will have been reduced to 3 meaning that he would be unable to attack even with a short sword (3-3=0) but if armed with a dagger he will still be able to attack (3-2 = attack on segment 1).
A combatant can take as many actions as their personal initiative allows ie multiple attacks are possible. This is modified by: each successful hit reduces personal initiative by 3 and each miss by 1. Missile weapons are unaffected by this modification and suffer no penalty for a successful hit or miss.
Dual weapon fighting – unless the combatant has an extremely high personal initiative the main advantage of dual weapon wielding is that it allows a choice between two weapons with different SF.
Shields – not only do shields confer an AC bonus, shields can also be used as a weapon (1d2 damage for standard shield) with SF of only 2. A successful hit upon an opponent might result in the opponent losing the ability to attack that round.
Pummelling with sword or weapon hilt - allows a combat option for weapons when the personal initiative does not allow enough time for a full attack.
Brian is armed with a normal sword and shield. He again has a personal initiative of 5. He could attack on segment 1 with his sword but could choose to attack on segment 3 with his shield. If he elects to attack with his shield if he hits (-3) he will now have a personal initiative score of 0. If he misses it will be 2, allowing a possible remaining action/s.
If a combatant carries out no action for an entire round and additionally has received no damage, they are +2 personal initiative for the following round only.
Spell Casting
Spell casting is slightly different. Personal initiative is determined as above but spells take time to cast. Spell casting time in segments = Spell level*2.
Such that spell casting can commence on the segment corresponding to the determined personal initiative but must be vocalized over a number of segments equivalent to the spell casting time, and only then does the spell effect takes place. Any damage received before spell casting commences means that spell casting cannot commence that round. Any damage received during spell casting results in that spell being lost. A spell caster may only ever attempt to cast one spell per round. As can be seen high dexterity becomes important for magic users attempting high level spells. Unlike weapons and other actions however, spell casting can continue over onto the next round, commencing at segment 10.
Bryony, wishes to cast magic missile (casting time = 2 segments). She has a 5 for personal initiative.  She can commence casting on segment 5 and the spell takes effect (magic missile released) on segment 3. Any damage she receives in segments 5 or 4 will disrupt the spell.  If Bryony was casting a 3rd level spell (casting time 6 segments), and provided she had not received any damage before commencing casting (which not only would result in the loss of 2 from personal initiative but prohibit spell casting that round), she could commence casting on segment 5 and the spell would continue into segment 10 of the following round (Bryony does not roll for personal initiative) taking effect in segment 9 of the new round.
If my alternate staff and wands house rules is used (see My Stuff) staves have a SF 5 and wands SF 2.
Anyone care to try this out?
PS: sorry for the lack of posts, still here, still reading my daily fill of OSR blogs, just haven't been inspired to write.

Posted by The Jovial Priest at 22:06 1 comments