My four and a half year old son was badgering me this last week to play Warhammer.

I knew he was a little confused, as I haven't played Warhammer in years. What he was recalling was the D&D campaign I played for my friends a few months back, and the battlemat and Warhammer miniatures we used. Since the campaign sessions often finished late I would leave the battlemat and miniatures out, so the next morning my son and seven year old daughter would see them, we'd roll a few dice and kill a few baddies over breakfast.

So today when he requested Warhammer I thought - perfect opportunity to play D&D.

I quickly printed off the 2 page KIDS' D&D HOUSE RULES BY JIMM JOHNSON  and two of his character sheets and we were ready to play!!!

I'd been saving these rules for just such an occasion. These rules really are fantastic - two pages long, 4 classes, no abilities.

With no time at all my son was the knight Flipback Bomb and my daughter Eliza the warrior princess.

My daughter was especially taken by the mission - rescue the kidnapped princess (a real princess). 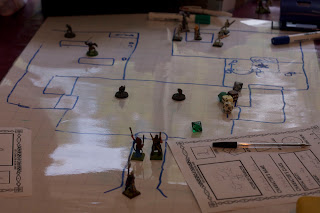 We had great fun - the map and adventure I made up in my head 5 minutes before playing. I wanted monsters and combat, but also some traps and puzzles.

DM notes
A hermit had told them of a cave in the mountain where he thought the princess was.
Opening corridor was dark - they needed to use their torches from their equipment list.

West room - led to the kitchen where a goblin and orc were. In the kitchen was lots of raw and cooked meat. There were a few barrels - one barrel contained two ropes (originally one but sharing isn't the 4 year olds strength).

East room - led to a room with three cages against the opposite wall. The middle cage had a hungry lion in it. At the back of the lions cage was a door.

My daughter took great delight in thinking she could distract the lion with some food - and then remembering the meat from the kitchen!

Final room - a deep pit with Princess at the bottom, with three skeletons around the outside and one boss skeleton (since my son wanted to use a boss miniature)

My daughter used her rope to help the princess escape during the battle and the princess helped tthem defeat the skeletons.

A fine rescue. Apart from the tears from my daughter when reduced from 6 to 3 hit points. She still tells me she had great fun.

All up, I'm not sure who had the most fun - the son, the daughter or me.

My son wants the next mission to be - rescue the King... (he's trapped in an enemy castle....)

Posted by The Jovial Priest at 20:44 2 comments