W is for Water: Digging for Gems in the Dungeoneer's Survival Guide

After Volcanoes (fire) the opposing element is water.

Rules on hypothermia, yes the DSG doesn't let the DM down in this important area of advice, though it does present Hypothermia as an optional rule.

Page 42: "A character becomes subject to hypothermia (a disastrous lowering of body temperature) after one turn of swimming in a typical underground body of water. If a character is moving through water between knee and waist deep, hypothermia effects do not begin for one hour; if the water is shallower than knee deep, hypothermia is not a threat. After hypothermia sets in, the player must make a Constitution Check. If the check fails, the character loses ld6 hit points. The check must be repeated every turn, with all hit point losses accumulating until the character reaches some external heat source that can warm his chilled body. Hit point loss continues even after the character has gotten out of the water, if no heat source is found. If a means of warming up, such as a fire or the close presence of other warm-blooded creatures, is located, [it just shows how little I matured from my teenage years when I read this phrase] the character regains 1d6 hit points per turn until the losses have been fully recovered."
I won't outline them fully but there are rules for the flow of water and its implications:
Stagnant
Placid
Medium
Rapid
Cascades
Waterfalls
There are rules for damming a river, I kid you not!
In an average waterway, water held back by a dam fills a 10-foot cubic area (10 ft x 10 ft x 10 ft = 1,000 cubic feet) times the waterway’s flow rate per turn. Thus, if an average-width waterway with a current of five is dammed, the water backs up at a rate of five 10-foot cubic areas (5,000 cubic feet) per turn.
You see! You thought I was joking.
And there is a whole section on Underground Water Travel. Including magic Folding Boats (you carry it to use if you come across a lake while spelunking.) Don't forget to take those non-weapon boat proficiencies if you hope to stay alive.
Good luck! Enjoy these 2 Greg Harper pictures from the DSG: The Raft and the Boating Magic User 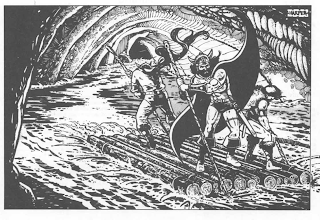 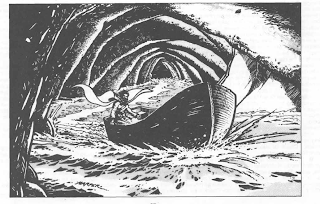 If anyone knows of a web site of Greg Harper images, let me know. I think he is under-rated.