T is for Theories: Digging for Gems in the Dungeoneer's Survival Guid

There are theories about what lies beneath the crust of the world. The DSG explores a few.

Theory 1. The Hollow Earth Theory
The world is not solid, it is hollow. The earth's surface a mere crust over a vast open space.
What's inside the hollow:
A small version of the world floating in the middle of this atmosphere. Forever dark, perhaps lit by volcanic activity. Or the volcanic activity is so intense it rains upon this world, and only hear resistant creatures can survive.
An alternative far-fetched theory is that entire center of the earth is hollow but creatures can live on the inside surface of the crust and look up at the center of the earth. Is this a reference to the Hollow World Game setting? I hope so. For more info and maps visit http://pandius.com/hllwwrld.html 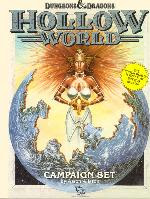 An variation on this theme says that only flying and levitating creatures can live in the hollow, and in fact forms a point of contact between the Plane of Air and the Prime Material Plane.

Theory 2: The Swiss Cheese Theory
Like many children I tried to dig a hole in my garden to China. If the swiss cheese theory was correct, I might have succeeded. In this theory the world is fundamentally solid, but there are enough caves, caverns and artificial passageways exist to allow an individual to travel anywhere under the world. This might explain why goblins, hobgoblins and orcs, who don't like the surface can be found everywhere and have similar cultures.

Theory 3: The Isolated Pockets Theory
The least imaginative theory according to the DSG, says that although there are areas underground of vast cave and cavern complexes with highly developed competing cultures, each of these underground regions is an area unto itself, with no subterranean connections to any other underground regions.

Gems we should take
1. The world is not solid, it is hollow, well that's one theory anyway