O is for Odor & Explosive Gas: Digging for Gems in the Dungeoneer's Survival Guide

Olfaction, the first Cranial Nerve, the neglected sense in man, less so in women.

Explosive gas just under one pint (0.5 litres) per day.

The DSG even deals with this odiferous topic. 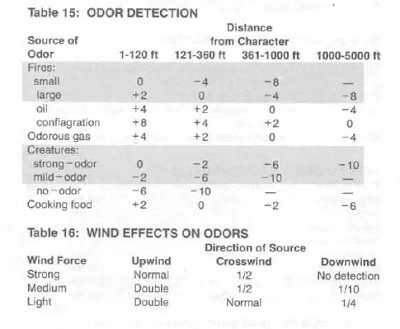 There you go, you thought I was kidding.
The rules for detecting smells are based on a wisdom check (I hate ability score checks but that's for next month, I'm on holidays attached to an ethernet cable - Ho Hum but still preparing this for posting Monday night!)

Dogs detect smells as if they have a wisdom of 16 and have double the human range in Table 15.

Gas
Gases can originate from a number of [underground] sources. Ok, I was joking, DSG doesn't have anything to say on farting. I know you are disappointed, a good role-player should know these things, teenage players certainly did/do.

DSG divides gases into poisonous, noxious and explosive.
Poisonous eg volcanic gas is as poisonous as the bite of a venomous creature and requires a saving throw vs poison to avoid/minimise the effect.
Noxious gases eg garbage or sewerage generating methane can overcome and requires a constitution check every round, failure results in ability scores being by reduced by 3. Characters are helpless when ability scores are all 3, but their hit points are not effected, so they aren't killed.
Natural gas, is almost odorless and often found near coal seams and oil. Wisdom check allowed if moving carefully. There is a 20% chance of explosion per round if characters enter a gas filled area and carrying an open flame (lantern, torch). An explosion will cause 1d6 damage. The more concentrated the gas the higher the chance of exploding, DSG suggests increasing in increments of 10%, adding for each 10% +1 to the wisdom of each character for the purposes of their wisdom check detection, and for each 10% adding an extra 1d6 of damage.

If the gas is completely odorless no wisdom check is allowed.
"If, perchance, a party has a small bird with them and becomes exposed to a gradually increasing amount of poisonous gas (not including noxious gases), the DM should make a secret saving throw vs. poison for the bird one turn before the characters must save. The bird saves as a Oth-level human, and if the saving throw fails, the bird dies."

Gems we should take
1. Rules for Odor Detection
2. Rules for Gas - Poisonous, Noxious and Explosive