F is for Fungus: Digging for Gems in the Dungeoneer's Survival Guide

There is an awful lot of FUNgus in the DSG, let me give you a taster...


Perhaps one is unsure what non-proficinecy skill should be chosen for your character, may I suggest Fungus Identification.
This proficiency is very useful on extended underground expeditions where characters intend to live off the land. Fungi are the only plants that commonly grow underground, and approximately 50% of all fungi discovered there are deadly poisonous. For this reason, an edible fungus harvest is virtually impossible without the aid of a character proficient in fungus identification. If the character has plentiful light and an opportunity to study the fungus in question for one turn, no Proficiency Check is necessary. However, if the character is unable to see the fungus clearly, or must make a hasty decision about whether or not it is edible, the check must be made.

Perhaps, one needs to build a boat to pass over a great underground lake but there are no trees... may I suggest that:
Certain rare species of fungi with solid, woody stems also grow underground. When they can be located, these are often harvested for use as wood.
There are lower forms of life than an adventurer, consider the humble fungus, bottom of the food chain.
The underground food chain begins with many types of fungi, lichens, and molds that grow without benefit of sunlight. Herbivorous creatures such as rothe and cave pigs have adapted to life underground by subsisting on these plants. Intelligent creatures have domesticated these herbivores, thus insuring a supply of fresh meat. As on the surface, unintelligent creatures generally eat what they can catch.
And that includes you!
If you thought you were ugly... 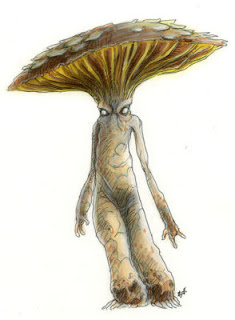 The race of fungus-men, or myconids, has branches in most of the deeper areas of the underground. Basically peaceful, the early myconids were nonetheless capable of defending themselves.
What, no torch...
These humans, numbering about 20, are mostly men. They live off the few fungi plants in the adjacent caverns, and an occasional fish. (Some of these fungi glow with a greenish phosphorescence and serve as feeble light sources.)
Beautiful, just beautiful 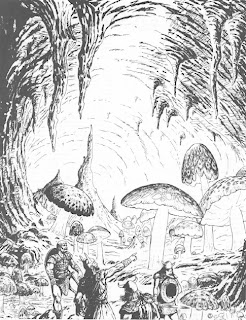 Risus Monkey did a fantastic job of converting the illustration to a geomorph. Click on either pic to take you to his posting. 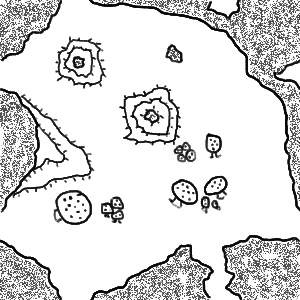 As an aside look at this symbol from the illustrator of the fungus forest. 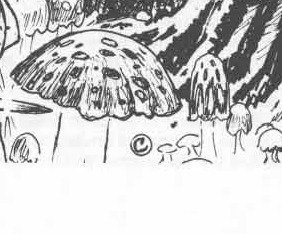 Who's C? I don't think it's just copyright, and this illustrator did lots of pics in the DSG. The illustrators listed for the DSG are: Doug Chaffee (is it him - C), Greg  Harper, Jim Roslof and Jeff Easley.
Deepearth has a Fungus Forest (how cool is that)
Each of the dozen or so chambers in the area is literally carpeted with thick growths of fungi. Every variety of mushroom, including shriekers, violet fungus, and a host of edible fungi grow in these caverns. The floor of each chamber is lined with a deep layer of soft loam, and a faint smell of decay hangs in the air.
Many of the fungi have been carefully tended and cross-bred so that they grow to extreme heights. The caps of the tallest mushrooms tower as much as 30 feet over the floor. Narrow paths lined with crushed stone wind among the fungi. Movement off the paths is virtually impossible without crushing some of the fungi.
The tenders of this vast underground plant garden are the members of an isolated band of myconids, or fungus men. The most important duty of the myconids is the irrigation of their fungus forest. Since there is no natural water supply in the area, they journey down the tunnel returning with huge, inverted mushroom caps filled with water.
Feeling thirsty...
The duergar have also developed breweries that use a red fungus rather
than grain as a raw material. The result is a pungent
and potent ale that is a common drink among the gray dwarves.
Hence, each cavern has at least one or two side caves hollowed
out as inns, and these are well-attended at all times.
I have a friend (yes I have one), who is a mycologist, and yes he is a fun-guy (how he hates that joke). He did refuse to play in my Keep on the Borderlands Campaign saying Sci-Fi yes, fantasy no.  Anyway he has allowed me to share these photos with you...


Gems we can take
1. Fungus is fun