V is for Volcanoes: Digging for Gems in the Dungeoneer's Survival Guide 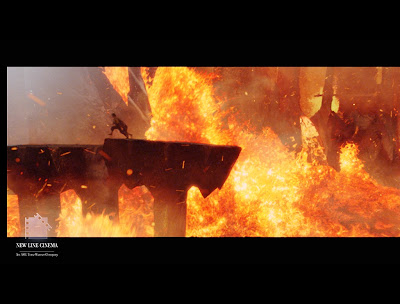 Well the DSG gives you all the fall to your fiery death opportunities one could hope for. 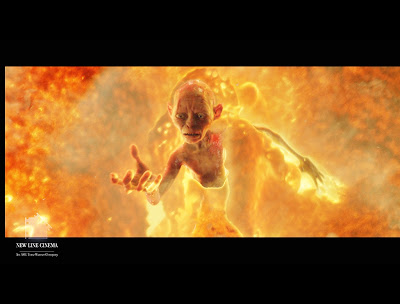 Speaking of Lord of the Rings, check out Peter Jackson's face book with first look at filming of the Hobbit.
Back to the DSG
Volcanoes are a major cause of subterranean fires and poisonous gas emissions, as well as other problems, like...
Hot Lava: Molten lava has a temperature of approximately 1,800° F, and quickly kills any non-fire resistant creature forced to come into contact with it.
If you are unlucky you might have to fight a fire elemental like this: 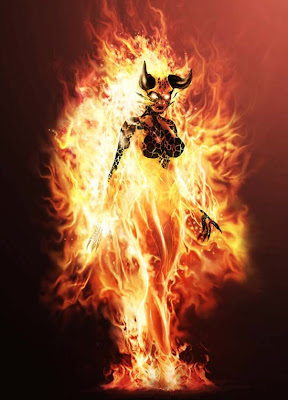 [June 2011: This image has gained this post enormous popularity. It is always my usual practice to source any image back to it's origin, preferably the artist. For this image I failed to do so. I obviously found it in Google Images. If anyone knows the source, please let me know and I will provide the link.]

The campaign world of Deepearth, as outlined in the DSG, have some hot areas.

Like a whole region called Lava Caves, with a Lava Sea, where fire giants sail upon.

How cool, I mean hot, is this description.


"The fire giants have devised an unusual means of transporting themselves from one island to another: they have sculpted massive granite boats that they row or sail across the surface of the fiery liquid. The boats are often propelled by wide stone paddles, used much like the oars on a galley. Occasionally, however, gusts of air, steam, or other gases sweep across the sea, and then the giants hoist sails to propel their boats. The sails are made of a mysterious cloth, perhaps magically treated, which resists the intense heat. When a forceful gust occurs, it can push the massive boats along at a clip that would do justice to any surface sailing ship. The lava boats range in length from 80 to 240 feet, with a width of about 20% of the length. Boats longer than 160 feet are equipped with a pair of masts, while the shorter boats have only single masts. In appearance they resemble a clumsy version of a Viking longship. Each boat has one pair of oars for every 40 feet of length. A stone tiller in the stern aids in steering."
Go on, take on a fire giant will you... 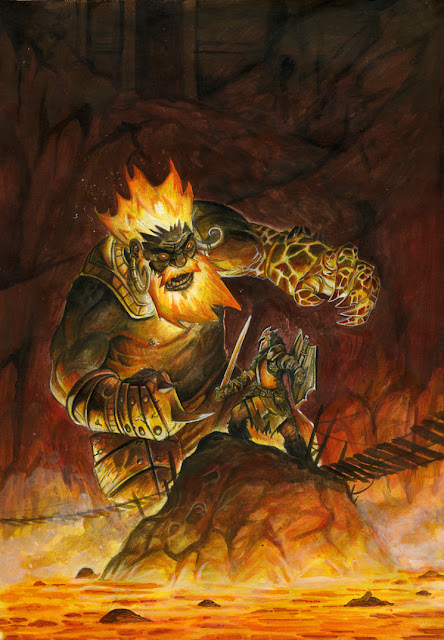