C is for Caves and Caverns: Digging for Gems in the Dungeoneer's Survival Guide

One of the things I loved about AD&D growing up, was that it never talked down to me. It invited me into an adult world and it educated me about language, history and science.

Just look at a few random words: ecology, egress, denizens and denouement. Denouement - I don't think I still know what that means. Page 105: "The primary function of the denouement (pronounced day-new-MAH) is to tie up loose ends."
See what I mean... how many books read by teenagers use words like these!

The same attention to fact, even in the fantasy setting, can be seen in the caves and caverns section of the DSG. Which is just as well as the book should really be called Caves and Caverns Survival Guide, or as Grognardia put it, "The Spelunking Survival Guide"; since there isn't much in the book about 'man' made dungeons. Spelunking - another fine word, as taught to me by D&D.

But take a look at this: 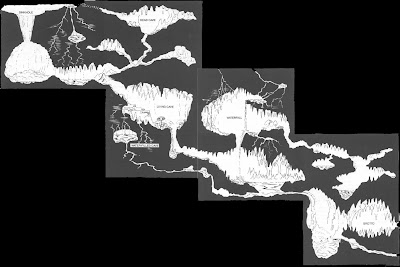 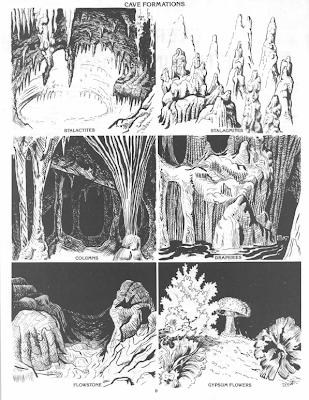 Page 7: "The most commonly known cave features are stony pillars known as stalactites (hanging from the ceiling) and stalagmites (growing upward from the floor)... Other types of cave features include draperies, flowstones, and gypsum flowers. Draperies (also referred to as curtains) occur where evaporating water has left a sheet of stone that resembles a ruffled curtain... If a cave is subject to continuing water seepage, it is considered a living cave."

I don't think even my friend, a geography teacher, could have said it better.

Can you have too much of a good thing - yes you can and the DSG is proof of that but still, it helps build a real world where fantastic things happen. I have always felt it is the real life rules to a fantasy world which allows the fantastic to be believed and comprehended.

Gems we should take
1. Though the golden age had passed and the silver age was passing, the tone of TSR publications remained mature and educational. Not what one would expect to find in a fantasy game rule book, but one aspect of the hobby that captured a younger me and I am sure, many of you.