G is for Gemstones: Digging for Gems in the Dungeoneer's Survival Guide

The Dungeoneer's Survival Guide gives some mining advice on gemstones.

This is a great Greg Harper illustration showing the greedy adventurers inspecting their find with glee. 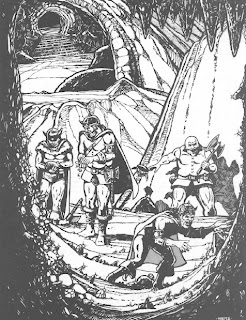 The DSG provides two tables: One a Percentile Roll to determine the type of Gemstone discovered (Table 32 and there are 16 different types given), the other listing for that particular the number of gems that can be mined per man-week and their average value , which will alter week to week. Table 34 and strangely amber is an addition in the second table.

Whilst vaguely of interest if one's PCs want to own a mine and ask how much they can earn from it per week, the real DM struggle I have is when the party discovers a gem within some loot, and it is worth say, 100gp, when the party ask what sort of gemstone it is, my brain freezes. So I know how much it is worth, perhaps because it is given in a module, but I can't describe what sort of gem it is.

So using the average value of mined gems I have worked out this little table.

If you know the gem value but want to know what type of gem it is use this table.

Reroll until suitable roll made, or choose. You may note I have added pearls but they wouldn't be discovered if underground, but the table is more generic for loot, rather than mining.

Gems we can take
1. Gemstones themselves, there are many different types and if you discover a mine of them, the Dungeoneer's Survival Guide will tell the DM all one needs to know. [Yes I agree, today's gem is rather weak!]

If you want something more useful on gems click HERE!