N if for Niles: Digging for Gems in the Dungeoneer's Survival Guide

Douglas Niles, author of the DSG and author of many other fine D&D products.

I have just acquired off eBay, Horror on the Hill, filling nearly the last hole in my BECMI collection of modules. 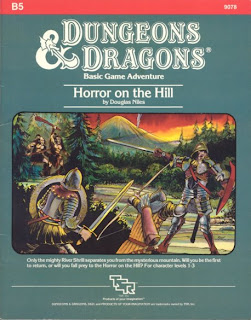 Horror on the Hill may not have been my first D&D game but it is the first I clearly remember. The party of 1st level characters was attacking down into second level against the hobgoblins and when it looked like they would be overwhelmed, retreated up the steps to 1st level and used the tables to half barricade the stairs and lob flaming oil down onto the hobgoblins. It must have been tense as I remember it well.

That party went on to be my longest running BECMI campaign, equalled in length only to my AD&D campaign I ran for years with my younger sister (AD&D allowed us to have a greater variety of classes).

The BECMI campaign was played with two other friends and we rotated DM, and we each controlled more than 1 character. We were probably 13-14 when we played Horror on the Hill. 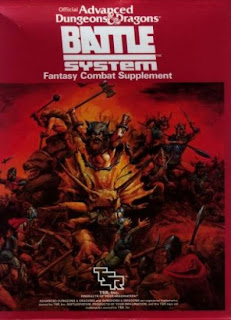 So I have fond memories of Douglas Niles, and also I have envious memories of my friends Battle System also by Douglas Niles. I pored over that. As anyone reading this blog will know - I love rules. I can't recall us ever playing a single mass battle with Battle System but it was one of my first purchases off eBay when I started collecting - and buying all the things I wanted as a child but couldn't afford.

Well one can dream.

So Douglas Niles has plenty of old school credibility in my mind and in the DSG he shares some of his wisdom and advice about dungeon mastering in a very coherent fashion. If he had blogged what he wrote it would be top of the blog pile for advice and I would have immediately placed it prominently into the Links to Wisdom house rule wiki (Don't forget to vote for the logo poll at Daddy Grognard)

Some of his wisdom:
Players are generally either adventurers (action and combat orientated), problem-solvers (who see the campaign as a great puzzle, who like plot twists) and role-players (enjoy creating details about their characters).

Most of my campaigns I have been with friends who prefer adventure, with my sister the role-play and learning more about our characters was the most important thing. Combat, especially for her, was just the steps required to develop ones's character.

Niles describes that often your players have mixed and changing interests between these three stereotypes, so a DM needs a fine art of Juggling and he offers advice.
In world setting he describes how one can add richness and detail and emphasises the importance of consistency, and how other intelligent races in a world will make a difference.

He talks about the importance of story and story telling for a DM dividing a typical story into
1. Exposition (where you capture the players attention and he says "A common mistake of DMs (and, alas, module designers) is to have a non-player character deliver a long, detailed speech to the PCs" and he offers advice - acting it out, distribute maps and documents, distribute information cards to different players
2. Development
3. Denouement - where loose ends are tied up

He then talks about running multiple story lines and using the below as motivators and enticers for ones players.
- villains
- foreshadowing
- mystery
- challenge
- reward
- magical items
- wealth
- discoveries
- gratitude
- accomplishment
- experience points
- moral

Finally he gives advice on preparing for play, using pace and your voice and a few other gems.

14 pages in all and NO, I won't just tell you everything he says in all these topic areas after wetting your appetite

Gems we should take
1. The most coherent advice for the intermediate experienced DM ever published in the Gold and Silver
age of TSR.

Email ThisBlogThis!Share to TwitterShare to FacebookShare to Pinterest
Labels: AtoZ, DSG, me, Niles