Links to Wisdom wiki poll results are IN

The poll has closed, what choices have you made?
The number of votes cast was small, maximum 38 votes, but the poll, was advertised on the wiki so I'm planning to tell Alex to go with it.

What can we take from this result? My thought is that a slight majority wish someone to take responsibility for headings and structure (the organisation of) the wiki but this shouldn't be too dictatorial.

I propose the creation of Wiki Wardens. (Hey, stupid names are our reason for being)
Individuals who nominate themselves to regularly check on the wiki and help keep it organised. If you want to be a Wiki Warden just contact Alex or myself, and you are in, as simple as that.
Additionally ANYONE who sees something under the wrong heading, should feel encouraged to get in and fix it up, there and then, without first seeking any permission. Just do it, we all are responsible for making the wiki work.

I hope this captures the essence of the poll result most clearly. 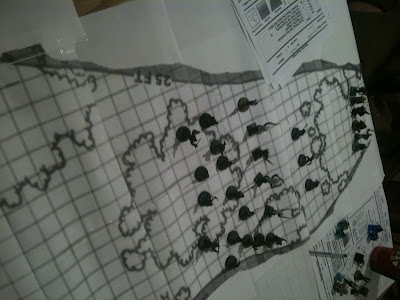 It worked fantastically, for excitement that is. It cost one character's life, and two were captured. But three escaped with the treasure, including powerful objects of evil, which they immediately gave up to the NPC who had been playing them from the very beginning. Cue, evil DM laugh. The Keep fell to the forces of chaos soon after...
PS I was struggling to work out how to make the scanned map from the module so large. If you put the jpg into Excel then you can expand over multiple sheets of paper. Simple. After a few single sheet print efforts I had expanded the squares to 1 inch size. Perfect!