P is for Proficiencies: Digging for Gems in the Dungeoneer's Survival Guide

Maybe people welcomed them when they arrived in the DSG - building off Oriental Adventures an even more developed selection of non-weapon proficiencies. Now, using the retrospectoscope, and our own non-biased opinion, we can see the the creation of a bloated system of role-player draining kryptonite.

The mechanic to resolve non-weapon proficiency checks depends on the proficiency. Most require no check (unless stated) but if the character is restricted in some way, the example given is a boatwright stranded in a dank underground cave (at least there is homage to the book these proficiencies are given in) with limited boat making resources; the other time a check may be required is judging quality of what the proficiency may have produced.

But heres a picture of a proficiency many players desired of their character, that is, each and every character they ever owned - a weaponsmith. It is also a fine Roslof illustration. 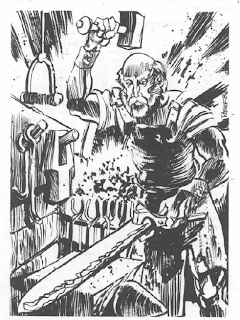 The non-weapon proficiencies always make me think of the cavalier - probably because alphabetically it is the character class one sees first CAvalier comes before CLeric. Why did Gary make Cavaliers and their sub-class the paladin, not a fighter subclass? Well the cavalier and the monk get proficiencies, quicker than any other class, every second level!

The non-weapon proficiencies are classified as:
Craftsman Proficiencies
eg the boatwright, weaponsmith, miner, gem cutter, weaver (for this level my cavalier chooses the weaver proficiency... you're kidding it doesn't seem in keeping with Sir Bruce... that is why he is now to be known as Lady Bruce)

Okay a cheap joke, I know the renown Flemish tapestry makers were probably made by men; or they took the credit. But did you know that at age 13-20?

Adventuring Proficiencies
Now these would be attractive to characters and players, here we come
eg animal noise, blind-fighting (oh yeah, power gaming here I come), endurance, fire-buiding, fungus identification (homage to DSG), riding, slow respiration (pt yourself in a trance and use only 10% of your normal air consumption), swimming.

So if you haven't bothered to take that proficiency you can't swim. And that's what I don't like about proficiencies. It's limiting to sensible actions or used for power gaming.

James M has this to say this to say about non-weapon proficiencies in his review of the DSG
"I still adored the book, which was fun to read and quite inspirational, but very little of its contents ever found a permanent home in my game. The exception, of course, was non-weapon proficiencies, which eventually became an integral part of AD&D. Though originally introduced in Oriental Adventures, it was in the DSG (and its 1986 twin, the Wilderness Survival Guide) that concept really took hold. Again, at the time, I thought non-weapon proficiencies were brilliant and added much needed depth to characters. In retrospect, I can see that they were a well-intentioned mistake that laid the groundwork for many of the worst excesses of 2e. But I wasn't alone in my love for them, which is why, despite their optional status in the Zeb Cook-edited Players Handbook, I never met a single player or referee who did not use them and lean increasingly on them for adjudicating almost any non-combat action in the game."

Yep, once we were chumps together - hey someone should create that title as a blog name.