A is for Author, Artists and Aims: Hitting the Trail with the Wilderness Survival Guide 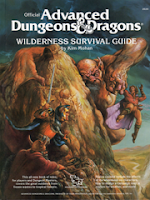 Last year in the AtoZ challenge I covered The Dungeoneer's Survival Guide. But it was the Wilderness Survival Guide I always coveted as a young and enthusiastic, but financially constrained, player. All those weather systems, surely that's what my game needed, to awesome it up?

Adulthood and eBay paved the way for eventually this Guide finding its way into my collection, where it has sat on a shelf, unread and gathering dust.

This years AtoZ  once again represents my attempt at research into a 25 year old book and the silver age of D&D. What worked, what didn't. But first and foremost my aim is to read the thing! and if I can share any handy survival hints from the trail, that will enliven any campaign, so much the better.

Published: 1986
Author: Kim Mohan
Seems to have joined TSR in 1979, lots of editorial experience in Dragon Magazine and then onto Amazing Stories. In the opening preface gave thanks to Frank Mentzer, Zeb Cook. In the Special Appreciation he refers to Douglas Niles who wrote 'The Dungeoneer's Survival Guide' as writing a book 'that was a very tough act to follow.' To EGG he said, 'who planted and nurtured the tree from which this branch has grown' which is one twig short of a love in, but I get the gist. It was the 80s, Duran Duran, Toni Basil and Lional Richie.

I'm not sure what the cover monster is? Crazy ass giant? But at least there is a river in the background showing something wildernessy - and really a nice link with the Dungeoneer's Survival Guide, which only now one year later - do I notice the stalactites. I thought, stupidly, it was also on a mountain, which I never understood.

Aims: The front cover says, "Topics covered include the effects of the wilderness on characters, how to design a campaign map, a system for weather, and more!" Kim Mohan says on page 5, "This book is an attempt to add structure and detail to that part of AD&D game rules concerned with the proper administration of outdoor wilderness adventures in the campaign."

Umm, administration and adventure in the same sentence... hardly allows for gonzo.

Well hit the trail with me over the coming month and let us see what we shall see.

Email ThisBlogThis!Share to TwitterShare to FacebookShare to Pinterest
Labels: WSG