Reimagined demi-humans and Coats of Halflingkind 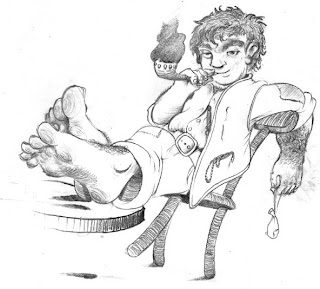 This image from Mikael Hollsten and other works can be found HERE.

Two posts have inspired me to reimagine D&D demihumans. The first is less a single post and more B/X Blackrazor's race as species musings. The second was this paragraph by Old School Psionics:


Magic Users, and humans in general by association, are hated by magical creatures, because of the exploitative method of magical ingredient harvesting.    Boots of Elvenkind, for example, are not boots created BY elvenkind, but are boots OF elvenkind.    As you can imagine, elvenkind does not appreciate having their foot skins harvested for the making of human boots...    Nevertheless, humans value such boots greatly, as they allow their wearers to move silently through the forests.
It left me thinking about B/X class as species, and a desire to make dwarves more than just short stocky humans. I wanted to allude to the medieval magical dwarf. I wanted all demihumans to be magical. I wanted cloaks of Halflingkind that help the wearer to HIDE (pun intended) in the wilderness.
I haven't succeeded in creating this atmosphere in my campaign yet, but I am working on it. The below is not a full fledged game mechanic it is an evolving idea. It has led me to the idea that all demihumans are spellcasters. There are no spell books, as spells are gained like clerics. However, like my human Templar Clerics, the caster does not know all spells in that spell level at once, but knows only as many as their allowed casting quota per day plus their wisdom bonus.  Such that Wisdom, the perception of the unseen world, and the will to use it, determines the demihuman spellcasters strength.
Elves
Creatures of air and water.
An elf, is essentially a Labyrinth Lord Advanced Edition Companion (LL AEC) druid, with spells restricted to air and water. When you think about it, elf as druid is very apt. Forests, nature, talking to animals, moving lightly and unseen through the wilderness. I didn't want my elves to lose their options of B/X magic user spells so I allowed them the ability to also have a magic user spellbook. That is an elf can cast both elf spells (druid spells) and magic user spells but the number of spells cast per day is limited by level, such that a 1st level elf can still only cast one spell / day but this can be of either druid or magic user variety.
Spells known: Minimums: wisdom 9, minimum intelligence 9 to cast magic-user spells.
An elf can can cast magic-user spells but this will require the elf to own and maintain a spellbook. Like a magic-user an elves spell book may contain as many spells as they can cast per day plus an additional number can be written into the spell book, per spell level, as determined by their intelligence score bonus.

Dwarves
Creatures of stone and fire.
Dwarves live underground, they like to work in a smithy - stone and fire - works for me. Like B/X clerics, all other demihuman spell casters do not get spells at 1st level.
The dwarf spells are mostly derived from LL AEC druid spells, focussing on, you guessed it, stone/earth and fire. These ideas are very very rough.
LEVEL 1
1. Detect Magic in metal, stone objects

OTHER POSSIBLE (depending if higher levels can be gained and how it plays over time...)
Transmute Rock to Mud (reversible)
Wall of Fire

Animate Mineral
Conjure Earth Elemental
Fire Storm
Fire Chariot
Statue
Halflings
Creatures that are hard to kill.
"If you have had to beat a halfling to death you will know they just won't stay dead," Wild Billy.
Halflings are magic creatures that are good at hiding, and can take a beating from any source.


Water Breathing
Invisibility
OTHER POSSIBLE
Temperature Control
Orcs
Creatures that hunt you.
The Tolkienesque concept that elves and orcs share a heritage is very appealing to me. What if instead of skulking in caves, orcs hunt in forests. Evil elves but diminished. In fact you don't want an orc chief on your trail, they live for the hunt. See my last post for a possible female version.


1. Insect Swarm
2. Poison (reverse)
3. Locate creature (There will be nothing to stop us this time)
Goblins
Creatures of stone.
Strongly influenced by Raggi's Hammer of the Gods I want goblins to have a big grudge against dwarves. The dwarves stole fire from the goblins, or so the goblins believe. Goblins are like dwarves, could they be related, but diminished. Goblins are smart, magical but small. Hobgoblins are the dumb, nonmagical brutish cousins the goblins often have to coexist with and are often subjugated by.


1. Pass without Trace if underground
2. Infravision
Hope you enjoyed!